Last summer, Margaret Morales from Sightline Institute visited the farm to learn more about our trial agroforestry plots.  Below is a nice article she wrote for PCC Market’s, Sound Consumer, a local, grocery coop’s newsletter. 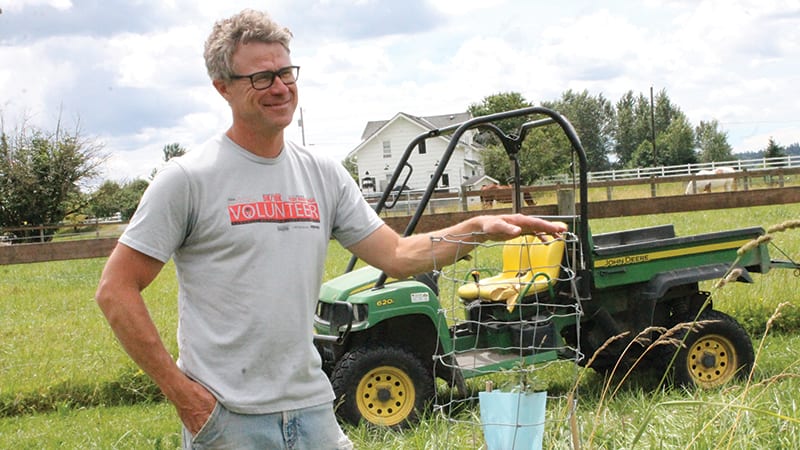 Nick Pate can look across the street from his farm into Washington’s Snohomish River, where five salmon species swim to their spawning beds. The salmon are fighting a losing battle with habitat loss, declining water quality and rising water temperatures. Chinook are among the hardest hit—less than 10% of their historic numbers now swim in the river.

When Pate bought his farm a little over a decade ago, he found a small creek running through it, flowing straight to the Snohomish. Its banks had been nearly stripped of vegetation. Riparian habitats—the diverse and delicate ecosystems along waterways—protect water quality and have an enormous impact on aquatic life, yet they are vanishing from Washington’s landscape. Since its statehood in 1889, Washington has lost over 50% of its riparian habitat. That loss is a key obstacle to salmon recovery.

Three years ago, Pate began experimenting with agroforestry—a farming technique in which producers include trees and shrubs throughout crops and pastures to boost both resilience and yields. Agroforestry is not new. Generations of indigenous people all over the world have practiced agroforestry, and it remained common on Cascadian farms and elsewhere through the early 20th century. Today, however, most commercial farmers in Cascadia ignore it. Pate believes agroforestry could hold the key to protecting the creek water and keeping his farm competitive.

Thriving riparian buffers cool stream temperatures by as much as 10 degrees Fahrenheit, cut erosion, and filter fertilizer runoff and pesticide drift before those toxins enter the water. Those services make them critical for salmon survival, yet these ecosystems continue to degrade and disappear in Washington.

Over a third of Washington’s salmon streams on private land pass through agricultural zones but state programs to aid farmers like Pate in protecting streamside habitat aren’t working. The programs rely on voluntary enrollment, offering farmers financial incentives to participate. In exchange, almost all programs require farmers to take the riparian acres entirely out of production. For most producers, the benefits of enrolling aren’t enough to offset the financial loss. In 2007 Pate enrolled some of his creekside acres in the Conservation Reserve Enhancement Program (CREP), a federally funded program for conserving environmentally sensitive areas on agricultural land. The program covered the cost of planting native trees and shrubs along the creek and pays an annual rent for the land that he’s taken out of production. The payments amount to less than $400 per acre each year. In exchange, Pate agreed not to graze his animals or harvest anything in the buffer, nor grow anything other than CREP-approved native plants. Nick says the money doesn’t cover the cost of his lost production.

Pate isn’t alone in his disappointment with CREP. Farmers across Washington have enrolled fewer than 6% of the state’s total qualifying stream miles in the program. Carrie Brausieck, a resource planner at the Snohomish Conservation District, believes the program’s rigid “no touch” rules—which prohibit farmers from using the enrolled acres in any way—discourage enrollment because payments are too low to make participation pencil out. The financial loss from taking riparian acres out of production may be hardest on smaller farms, like Pate’s, where the program’s minimum buffer widths—which range from 35 to 100 feet—can eat a large portion of total farmable land, including many of the most productive acres.

As Pate’s frustrations grew, the Snohomish Conservation District approached him with an alternative to the no-touch model. Instead of paying Pate to keep his land out of production, the district wanted to help him create a working riparian buffer, using agroforestry practices to produce revenue while still protecting the water and fish habitat. The district gave Pate a small grant, coupled with technical design assistance, to plan and plant three agroforestry trials near the creek.

In one area he planted a food forest, intermingling aronia berries, currants and huckleberries with hazelnuts, walnuts and chestnuts. He planted rows of cider apples in his hayfield to create an alley cropping system. The land produces two distinct yet symbiotic crops—the hay keeps orchard weeds down, and the trees shade the grass to extend the growing season. In a third area, he installed a silvopasture—a combination of trees and pasture—for his Scottish Highland cattle, adding alder, willow, walnut and locust trees to a grazing field. The trees reduce heat stress for the cattle, the locust provides a second forage source, and the walnuts will produce nuts to sell commercially as well as income from timber.

None of the trials come right up to the creekside. Rather, Pate situated them like a second line of defense, behind thinner strips of native plants that directly border the waterway. The combined width of the native plant alleys plus the agroforestry swaths is larger than CREP’s buffer requirements, creating more opportunity to filter fertilizer and pesticide runoff before it reaches the creek.

The intermingling of plant species above ground supports a more diverse microbial world below. That complex web underpins soil health, nutrient availability and pollinator abundance. Together these benefits can reduce reliance on synthetic fertilizers and pesticides, saving farmers money and reducing toxic loads in nearby waterways. When designed well, working buffers can still achieve the water quality and cooling benefits of no-touch native riparian buffers.

Pate’s three agroforestry trials could add nearly a dozen new income sources to his farm—from currants to timber to hazelnuts. That’s been one of the most important benefits of agroforestry for him, as it’s made his farm more resilient to market and weather volatility.

THE CHALLENGES OF SCALING UP

Farmers face enough risks from the weather and markets; adopting new farming practices adds the risk of the unknown. Orchard trees can take up to a decade to reach peak production, and farmers on tight budgets may not have the reserves to wait out those lean years. A smart agroforestry plan can ease startup by including fast-growing species that provide more immediate returns. Conservation programs could also provide bridge funds to help farmers make up lost income during the initial years.

Polycrop systems also complicate harvesting as many crops require specialized processing before they are ready for market. When those facilities aren’t nearby, the added supply chain complexity can cut into profits. And finally, there’s the wildlife. Beavers have now moved into Pate’s creek, drawn by the newly inviting surroundings. Though beavers are important for restoring salmon habitat, they can also destroy nearby crops, making them not only a nuisance but also a liability. Similarly, as it’s become harder to mow the hay with the new cider apple trees in the way, enterprising voles have moved in to feast on the trees. When Pate does mow, deer are all too happy to munch on the young trees. These challenges are often greatest during the startup years, making bridge funds and technical support particularly important.

Though agroforestry is garnering national attention for its climate, ecological and economic benefits, support for implementation in Cascadia remains meager. Pate’s grant was a one-off, not a sustained program.

The lack of investment means most farmers in the region don’t know about agroforestry, and most conservation districts don’t have technicians like Brausieck with the expertise to design high-functioning systems. Pate is willing to wrestle with the startup challenges of agroforestry in the hope of long-term benefits for the salmon and his farm, but he’s a rarity. State and federal conservation funding programs will need to prioritize agroforestry as a viable tool for riparian restoration before more Cascadian producers consider it.

All this comes in the midst of a larger conversation about the failings of riparian habitat restoration in Washington. Many Northwest tribes are concerned that existing voluntary incentive programs aren’t enough to save the salmon. Though agroforestry could help make voluntary programs more attractive to farmers, it won’t address the broader question of whether the state should more strictly regulate streamside restoration. Still, these techniques may offer a place to start bridging the stakeholder divide.

More extreme droughts and floods loom on the horizon for Cascadia’s farmers. As these weather events become more common, resilient and multimodal farming methods like agroforestry may become necessary for continued stable food production in the region. As Brausieck emphasizes, farming must adapt to a changing climate before the crops fail and the salmon disappear.

Margaret Morales is the lead researcher for the Farms and Forests program of the Sightline Institute, a nonprofit organization committed to making the Northwest a global model of sustainability. This article was originally presented in longer form at sightline.org

One thought on “AGROFORESTRY COULD HELP BOTH FARMERS AND SALMON”