November is a time of withdrawal.  Merriam-Webster’s summation of the word alludes to my feelings of the month.

Withdrawal: 1)  the act of taking back or away something that has been granted or possessed: 2)  retreat or retirement especially into a more secluded or less exposed place or position

As the sun sinks lower and lower to the southern horizon, I repent for my sinful whispers to see less of it in the summer.  This repossession of what was taken for granted forces me to look inward.  Wishing to be like that lazy mouse in the children’s book Frederick, I try to remember flowers, warmth, and energy that comes with ample Vitamin D. I fear, however, that I gathered too much grass and not enough Sun.

The cows appreciate my harvest though.  I tried poetry night in the barn, but the bovines were more interested in hay, salt, water, and constantly harassing each other.  I have a naive idea that only my cows don’t get along.  They’re like kids; and every time I see one gore another for a better slice of leaf, or body-check a sibling into the wall for being too close and not moving fast enough, I think my cows are the worst, while those in other barns contently eat hay and simply snuggle.

Well tough, in the barn they must stay: retirement into a more secluded and less exposed space.  Not that these hairy beasts mind the wind and weather.  To the contrary, Scottish Highland Cattle seem to love cold or blowing rain.  If given the option, you’ll find them in the fields and never inside during inclement weather.  (They’re more likely indoors during intense heat and sun.)  There in lies their sully attitude; they don’t want to be cooped up. 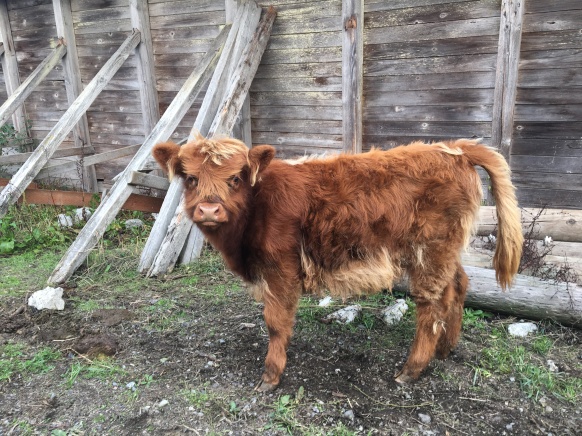 What needs a respite in November is the land.  All summer the earth was trampled by hoof and tractor tire.  Now, it get’s a break to replenish and rebuild with all the workings of things that are beautiful and beneath me.

For my boots still compress the soil.  I justify my Frederick farmer guilt with the saying, “The best fertilizer is the footprint of the farmer.”  That’s right, while you’re stuck in traffic I’m busy fertilizing my fields.  Early morning wanderings out into the hay fields and into the twelve hundred or so trees that make up our Conservation Reserve Enhancement Program or CREP buffer.  This thin line of forest diversity and vertical vegetation frames our northern border.  It also shades and filters a small waterway which is adjacent to it. (And home to a beloved beaver. Be sure to check out April 2018 if beavers are your thing.)

The CREP buffer is a secluded place.  Withdrawal into it is a time for observation and reflection.  Often, no matter the season, the space is like a naturalist/farmer’s car wash.  You enter one end muddled or drained from all the mooing and manure, and then, (out across the hay field and far from the sight and sound of what you should be doing), you come out fresh and revitalized.  Notwithstanding the calm of decreasing distraction, there is a spatial tranquility to the space.  Where forest meets field, the concept of Prospect and Refuge takes place.  Frank Lloyd Wright made exquisite use of this intuition.  His buildings are imbued with primal peace and excitement of early humans exiting the cave.

Ecologists and wildlife biologists recognize the benefits of these habitats as edge effects, or areas where animals have the prospect of food and the refuge of shelter.  The greatest farm species diversity and activity falls within this zone.  You can witness the exchange of life as birds, insects, and mammals make short forays out into grassland only to retreat back to the safety of a branch or bush.  The Song Sparrow is the most common tree and turf bouncer.  It chirps and scampers from the tall, dried stalks of grass to the lower limbs of alders as I pass.

Although I haven’t seen them of late, tracks tell that the coyote prefers the mown paths along the forest edge too.  In some areas the route is well worn.   Occasionally, it detours into the prarie and I follow the light paw prints to where a vole hole or mole hill is excavated.  This time, I wish the trickster all success.

In the open field, prospect is an advantageous, yet dangerous game.  Here, the American Woodcock and Savannah Sparrow find shelter within tractor tire ruts and folded clumps of fescue.  Later in the winter, flocks of Western Meadowlark will also peruse the Poaceae; their gargling and melodious song seeming to alight from nowhere.  Now, what we hear are vast armadas of Snow Geese.  Arrow upon arrow of the V-formation flocks pass up our welcoming fields for others who can’t stand them.  Apparently, the geese consume a large percentage of the dairy farmer’s hay cuttings.  For me, I would count it a blessing.  Not just to have the birds grace my farm, but also the first cutting of hay is a risky business.  Usually the fields and weather are too wet in the spring so I end up cutting in summer when the grass is stemming and gone to seed.  A Snow Goose feeding could be a good stunt.  Unfortunately, I’ll never know unless I can figure out a way to get  a thousand geese to land in spite of the power lines.

On a full circuit of the farm I always conclude with a stop at the river.  Here is our most dynamic edge and arguably the most diverse.  Home, road, and river all converge within less than a 100 foot strip of land.  The banks are steep due to flooding and tidal influences.  We have crayfish, salmon, kingfisher, bald eagle, cormorant, merganser, mink, river otter, deer, coyote, and yes, beaver all along the shore.  Once in a while a harbor seal makes the ten mile journey from Puget Sound.  It’s exciting to see this exotic mammal out of its usual habitat.  I often wonder what it thinks of this foreign and fresh water, and what drives it so far upstream?  Is it the possibility of easy fishing or a respite from the crowded waters of Puget Sound?

Whatever it may be, take some time this season to withdraw to a comfortable place, be like Frederick, that good-for-nothing solar sponge, and reminisce on lighter times.

Listen to all the traffic.  We’re too close to the flyway.