Surprisingly, about every time I work, feed, and walk with the cows, I think of their mortality.  Specifically, the dichotomy between our raising and caring for them, and our annual culling of the herd.  Although this will be our eighth year, it is never easy.

If I had been raised on a farm perhaps the reality of give and take would be inherent like a matter of the seasons, but I wasn’t.  Food came in boxes, bags, and shiny wrappers.  Much of it was processed.  Made in some far off factory on the outskirts of a city, or small rural town.  Food didn’t have a face or soul; it didn’t have a personality; it didn’t have a name.  Well, not entirely true, much it did have names with Super, Fruity, Chef, or Uncle. Come to think of it, food HAD a personality . . . It was a cartoon bird with a colored beak, a talking bottle of syrup, a dancing oven mitt, or lovable doughboy.  None of these adorable mascots were ever “harvested” or, even worse, “butchered”.  They always returned, day after day, and proclaimed “Eat me!”

But we didn’t.  They were too cute and practically a part of the family.  We did however indulge in what the pusher-puppet was pushing, and it was guilt free (minus those nutrient deficient calories).  Sometimes we even committed an odd cannibalistic crossover and ate meat if it was advertised by a funny cartoon animal of the same species.

Oh, ignorance IS bliss.  Keep your characters in the TV box, food in a styrofoam box, and farm animals in a box; preferably one like a picture frame with a pastoral fantasy of a big red barn, cows munching grass, and a rooster on a fence post.  Real life is different, and for close to a decade, I stopped eating meat because the reality of mainstream meat is so disconnected from what we think we are eating.

It is not my intent to describe the meat industry, nor do I feel it necessary to condone their actions.  Simply put, it’s consumer driven.  Want a fast burger?  Go down the chain and find your link.  Want a burger and the knowledge of how it (the cow/steer) was birthed, fed, treated, and finally harvested?  Find a small beef rancher.  Most likely, they’ll be a family farm who knows their animals.  They will have names for some, if not all, and when it comes time to reduce the herd, they will take cattle that have a name and a history.

“How can you do that?  I couldn’t.”  My aunt once asked with less concern for an answer and more to claim her high moral ground.  She is not the first person to interject this type of poison into what is already a difficult decision–a farmer’s guilt doubled with friend’s and family’s derision.  How ludicrous?  To think the responsible person carries the conscience of all.  And how I did enjoy her Holiday golden, foil-wrapped Honey Baked Ham.

How CAN you do that?  Not easily.  The answer is not a concrete moral high ground, but rather a moral quagmire.  I wrestle with it, and the reasons differ from the point of view of the questioner.  Beef has its issues, yet on our farm it pairs well with what we have and we want to accomplish.  For starters, it’s a hay farm on a floodplain.  In this combination we avoid two simple losses.  Loss of topsoil by annual plowing for cereal grains or legumes, and loss of nutrients by repeated harvest of grass.  Cows keep the land intact and they refertilize the soil with their manure.  But sometimes too much of a good thing is too much, so we remove animals every year in order to balance what the land can handle.

Game managers refer to this as a carrying capacity.  The idea that a forest or rangeland has the ability to sustain only a certain amount of wildlife, etc.  On forty acres we “carry” around 14 cattle through the lean winter, with roughly 18 during the lush summer.  For now this seems to work, yet there still exists the matter of removing four animals from our care.

Stepping back with the naïveté of the most well intentioned animal rights activist, imagine our herd free to reproduce and multiply without intervention.  After a few years of calving, our girls and boy (Red, Shannon, Clover, Cinnamon, Molly, and Puck respectively), would be hungry because the land would be overgrazed from too many stomachs (ruminant humor).  Eventually, with a lack of suitable forage, animals would die from starvation or fall prey to coyotes.

Sure, this is apocalyptic farmer talk, but the picture wouldn’t be pretty and it’s not something I wish to have any of our cows go through.  Rather, once a year, on a random morning, we set out some hay for the herd.  Let them calmly eat, while life quickly leaves a few of them.  In minutes it’s done.  By now the rest of cows are spooked and confused.  Me too, as farmer, executioner, and now turned savior, I lead them out to the safety of a far pasture where fresh grass awaits.

As a post script, I’d like to add a few descriptions of what follows the . . . killing.  (Not a word I like, but I feel it’s more to the point and more responsible than “harvest”.)  We take three to four animals a year and provide beef for close to a dozen families.  All of the consumable parts are taken off site by the butcher.  We keep as much of what remains as possible and eventually return it to the fields as compost.  The goal is to keep the circle of life intact; and thus, our cows thrive and survive almost (other than salt blocks) entirely from our farm.

Whereas, after a couple of weeks of curing, the beef sides are cut and wrapped by a (very) small town butcher for our clients.  These families go to the store and pick up their meat, which is frozen in cuts and sizes of their choosing.  The package is austere, white paper with a red print that reads: “Ground Beef”, “Beef Chuck Roast”, or “Tenderloin”.  No frills, no cartoon, no catchy jingle, no mockery of a life ended, but rather a simple truth and, eventually, a reverent meal with friends and family. 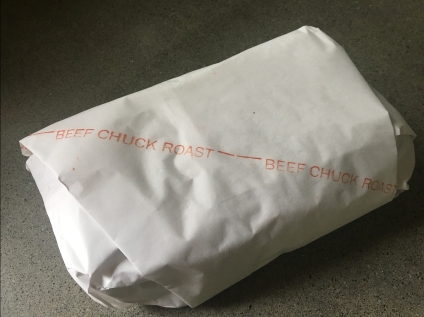